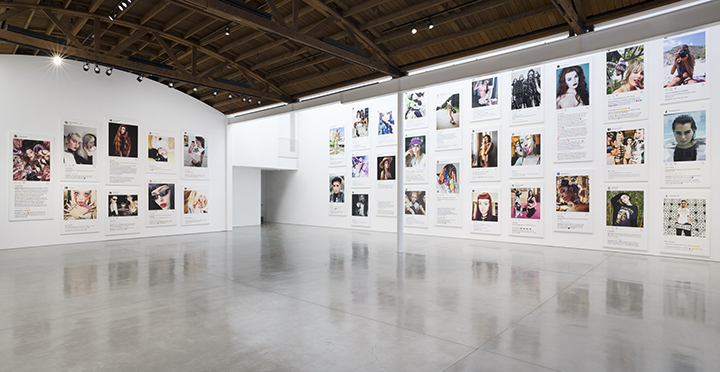 For Richard Prince, well known for his appropriationist works from the 1980s and 1990s, the discovery of Instagram opened a new window onto old methodologies. It was only after watching his daughter post to Tumbler that he came to understand the possibilities of social media. The grids and organizing principles of photographs he saw on Tumbler called to mind his "Gangs" from 1985— sets of nine photographs organized around a theme — Girlfriends, Heavy Metal Bands, etc. It did not take him long to realize the power of this global audience so Prince purchased an iPhone and began to embrace social media. Eventually, the past and the present coalesced. He found boundless source material online and was fascinated by the constant commentary about images, eventually joining the conversation, often contributing gibberish and emojis as "Richardprince4."

Who did Prince follow? What was he looking for on Instagram? To answer that it is necessary to consider his earlier work —the jokes, the nurses, the hustlers— as well as to understand his interests in media and popular culture, in 'image' and sex appeal. Instagram provided an ideal readymade. On Instagram, he found sexy women, raunchy dialogue and unabashed exhibitionism all within the rules of the game. Yet, Prince does not like rules and even found a way to hack Instagram feeds so his posts remained close to the image near the top. Realizing he could really only manipulate his view, he created screen shots to preserve the sequence. These images (and there are a lot of them) make up the exhibition New Portraits. The first time Prince exhibited the work, some of the subjects complained. They even went after him and this clash was all over the press.

So what went wrong? The commodification of images disseminated for personal gain by a male in his 60s was problematic to some of the people whose images he appropriated. The fact that most of his image selections contained pictures of women much younger than him was also an issue. He became an anonymous (or not completely anonymous) voyeur who captured a screen shot of something meant to be fleeting, printed it larger than life and then sold it for a lot of money. Therein lie the problems and the controversy.

In the past, Prince would select an image —be it from a magazine, newspaper or photo archive— rephotograph it and then reprint it and present it as an artwork under his own name. Other artists like Sherrie Levine also created works that were direct copies. In series including: After Walker Evans, After Edward Weston, After Man Ray, etc., she rephotographed 'famous' photographic images and asked viewers to look at them anew. Though this way of working was condemned by many, it —appropriation — was accepted by enough people and eventually came to influence a whole new generation of artists. That art could be made from other's art or from found photographs and still resonate was revolutionary. The artists of the 'Pictures Generation' were immersed in conceptual practices and through their work engaged in debates around authorship, context and interpretation. Although some artists working this way were sued for copyright infringement, it did little to change their desire to break new ground and stimulate conversation about the relationship between photography, art, advertising and commerce.

Rephotographing was a laborious process. With the onset of the internet, digital photography, mobile phones and social media, all that was necessary was to snap and post. Suddenly, there was a way to share everything instantaneously. Numerous websites now showcase images uploaded by a range of people, most of them not artists who do not think they are making art. They are merely posting friends and moments together and they have thousands of followers. Universal sharing is the norm. Platforms like Instagram, Twitter and Facebook have become communities, as well as sources for news and information. The notion of truth has faded, and fake news abounds.

In Prince's exhibition New Portraits, close to 100 images are installed salon style covering the walls of the gallery. The presentation has affinities to the way web pages are viewed — an array of like sized images amassed in a loose grid. How to begin? How to differentiate? Does anyone really want to read that much text on the wall? Each untitled portrait is a unique inkjet print on paper or canvas dated between 2014 and 2019. Instagram has a fixed format: the picture —either square or a vertical rectangle— is centered in a white background. The owner of the account is identified in a small circle at the top. To the right is a number that represents how many days (d) or weeks (w) ago the post was made. Below the image is the number of likes and a list of comments by both Prince and other followers. The pictures for the most part are juvenile and unremarkable. They are the kind of posed snapshots people post to Instagram to show off their outfits or their bodies or who they happen to be with.

While the photos are 'real,' it is impossible to know whether the situations are candid or fabricated for the Instagram audience. Prince indulges in this play, making screen shots of posts that catch his fancy. He comments on the images using a combination of emojis, shorthand and nonsense words. While most of the portraits have a few lines of commentary, some like an image by lilmiquela (from 2019) have paragraphs of text, in this case a diaristic diatribe about how to identify as a woman of color and three replies, one of which is a line of six red hearts. After careful scrutiny it becomes evident that a number of other screen names appear over and over again and that there is a rhythm to the conversation. Prince (@richardprince1234) and @joankatzz often post non-sense that has little to do with the image. After a while the images begin to cancel each other out and few resonate beyond the initial read. But perhaps this is the point. Prince has become a relentless voyeur who has chosen to reproduce an aspect of Instagram that celebrates celebrity culture and the desire to market a certain type of life style. There is nothing overwhelmingly special about this work, except for the price tag and the fact that Prince is still profiting from the fruits of others' labor, taking advantage of personal moments made public and ripe for the taking.

NOTE: A version of this review first appeared in Artillery Magazine, Gallery Rounds on April 1, 2020