Seam & Transfer, an exhibition of works by Fran Siegel and Paul Scott, opened at Wilding Cran Gallery on March 20th, just as Los Angeles was ordered to shelter in place. While the gallery posted ample photo and video documentation on social media, nothing really takes the place of experiencing art in situ. Two weeks before the extended May 30 closing date, the gallery offered viewings by appointment to give people a chance to see the exhibition. It was a privilege to examine the uncanny relationships between both artist's blue-toned works— Siegel's large-scale mixed media collages and Paul Scott's found and altered ceramics. 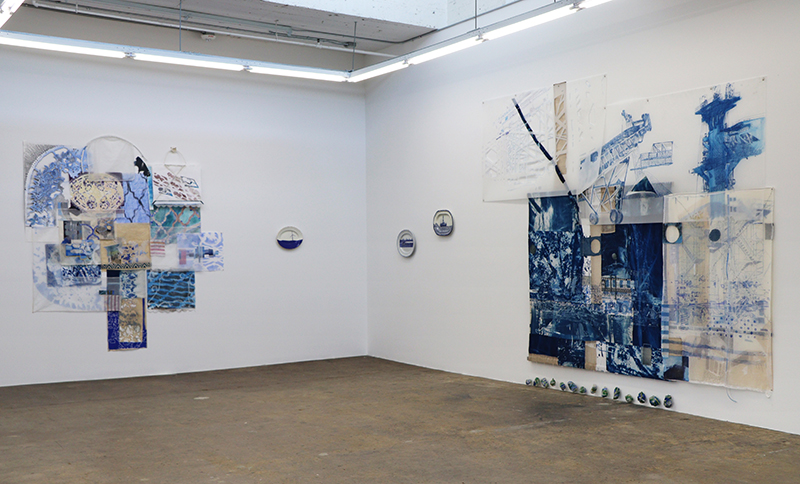 Paul Scott is a Bristish artist best known for his "contemporary transfer-printed ceramics." He combines and augments antique table-wares to address social-political themes. Interspersed with Siegel's suspended drawings are a suite of blue and white platters and plates with transferware collages and Kintsugi (golden joinery) that "subvert and update a classic decorative genre."

While Siegel's primary mediums could be considered drawing and painting, she often weaves numerous smaller-scaled pieces into large layered tapestries, sewing, gluing and collaging the disparate elements together. The starting point for her work is research and observation— be it a data set about environmental or population shifts in Santa Barbara, the history of early European porcelain found in various museum collections, or documentation of construction around San Pedro, CA. Many of the pieces (Siegel aptly refers to them as suspended drawings) in the Seam & Transfer exhibition juxtapose architectural and natural elements. For example, Henri's Open Fortress, (2018/19), which spans 120 x 150 inches is comprised of cut drafting film, pigment on cotton scrim, indigo dye on burlap, cyanotype, drawings and frottage on paper, cut drafting film, sewing and collage, attached amidst a plastic grid. Though delicate and translucent, it has a commanding presence and is simultaneously a barrier and a portrait of the landscape.

Inspired by Siegel's residency at the La Napoule Art Foundation in France near Cannes, the work references the local landscape and combines botanical patterns collected from nature and patterns from porcelain within the foundation's collection. Other large-scale works in the exhibition include The Collection, (2018/19) which Siegel refers to as a patch-work portrait of a place and Aperture, (2018/19) a work that references the orange of the sun in numerous ways. Siegel intersperses cutouts of the glow of the sun from old National Geographic magazines with orange mylar shapes, fragments from orange caution barriers and orange thread that suggest the rays of the sun. Many of the blue-toned prints on fabric are cyanotypes— a process that requires the light of the sun to be exposed. 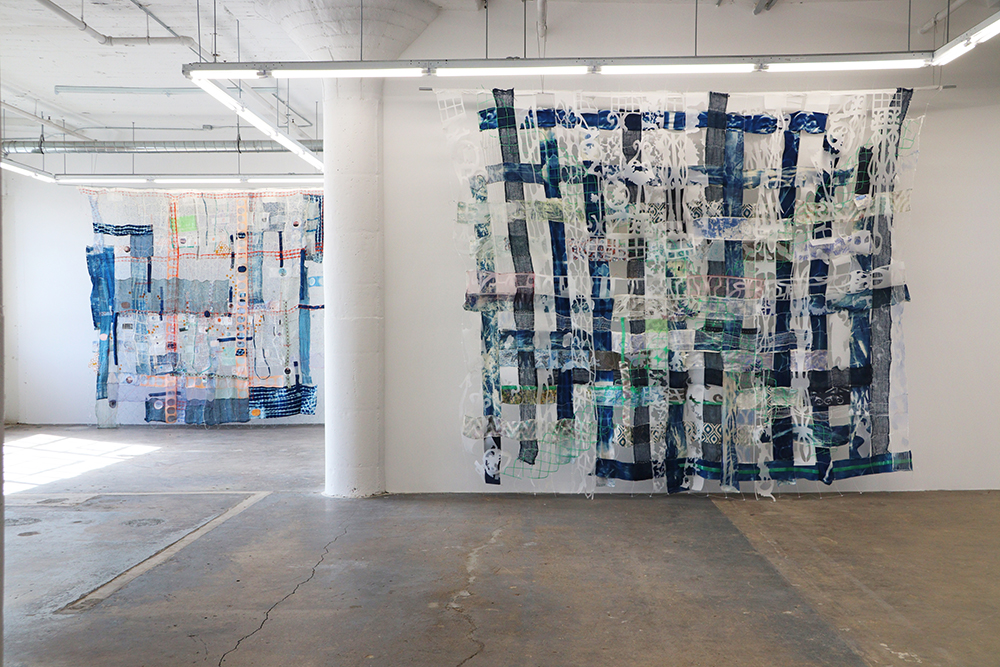 While Siegel's pieces are beautifully layered and texturally rich, they are based on a sophisticated conceptual integration of research and backstory which makes them resonate beyond their formal qualities. The fragments contained within each work function as building blocks — Siegel's pieces are extremely architectural — that create a coherent whole. Siegel's pieces take time to comprehend and can be entered from multiples places within the compositions. The trajectory through them is individualistic and not prescribed, making the outcome even more satisfying. 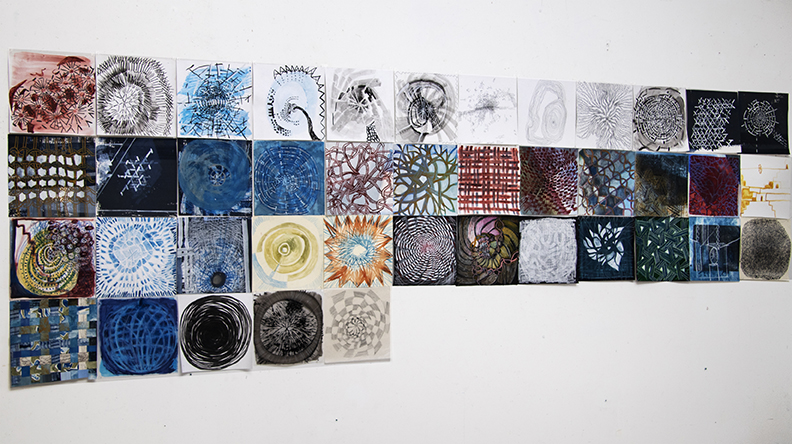 Often when Siegel finishes a body of work or hangs pieces in an exhibition, she steps back, taking a moment, as she says, to "reflect, restore and travel." As travel at present is out of the question, Siegel has been surprisingly productive in her studio preparing for two exhibitions later in 2020, one at the Long Beach Museum of Art, the other at Descanso Gardens. During quarantine she first created small (square) daily drawings— referencing the rapid growth of the Corona virus. Because Siegel's suspended drawings and collages are so dense and layered, seeing the individual fragments presented across her studio wall offer the ability to contemplate the intricacies of each element. The flower-like patterns inspired by the images of the virus channeled a connection between basketry and Fibonacci ratios. Working with line as well as color, these drawings have spontaneity and immediacy. The array of drawings led to the creation of a tableau of interchangeable tiles. As works in progress, Siegel is layering a table surface with a mutable arrangement of small stencils, patterns and string to create a work that feels like a model city. 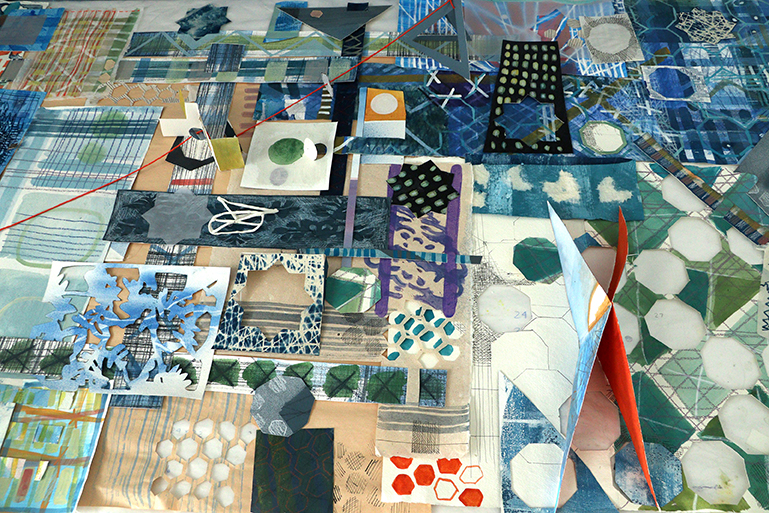 As the quarantine subsides and life gets back to semi-normal it will be interesting to see how Siegel's work morphs and how she integrates pre and post Covid life into her creations.