One of my thoughts when deciding to write a weekly art "pick" was to think about what shows stay in my mind from week to week. I see many exhibitions and often wander through the galleries snapping quick photographs so I can remember what I saw. Later, I revisit my Instagram feeds for reference and to retrace my route. Some shows I visit multiple times before I (metaphorically) put pen to paper. However, there are others that remain memorable and resonate on just one viewing. 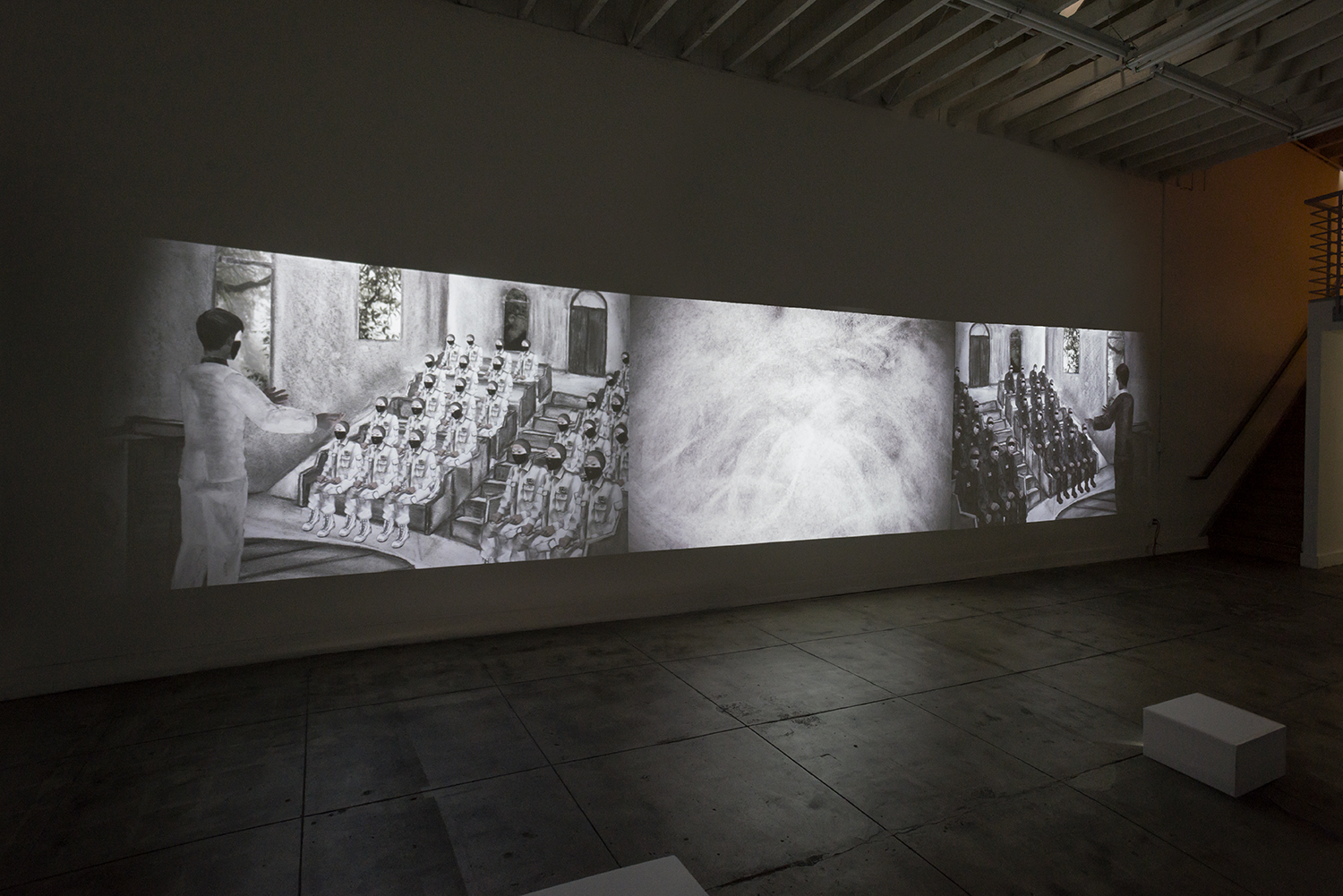 Young Joo Lee's installation, Mine at Ochi projects remains vivid in my mind's eye after experiencing the exhibition. Lee is not an artist I am familiar with and upon entering the darkened space of the gallery, I was immediately struck by the projected imagery. I am particularly interested in video works that use animated drawings and Lee's three channel, 17 minute Paradise Limited (2017), struck me as intoxicating, delicate and politically relevant. Also on display is a related 82 foot ink drawing, In Search of Lost Tiger (Paradise Limited) (2016) that complements the animated projection. This interactive work is presented in a custom box that allows viewers to scroll back and forth through Lee's beautifully drawn narrative representation.

Both pieces were inspired by Lee's 160 mile journey along the South Korean side of the Korean Demilitarized Zone between North and South. Since its establishment in the 1950s, it has paradoxically become a sanctuary for plants and animals. A keen observer and critical thinker, Lee has recorded her impressions and rendered this intersection of the built and natural environments, capturing both flora and fauna that co-exist amongst the barbed wire and guard towers. While her scroll is devoid of people, it serves as the catalyst and background imagery for Paradise Limited, her projected animation which imagines the DMZ as a mysterious in between space— an unknown with its own raison d'etre.

Exploring the rhythm of the projected triptych, Lee presents two scenarios that are purposely created as opposites or inverses of each other, (black vs white faces and uniforms, for example) on either side of a central third screen, that begins with an atmospheric swirl of drawn textures. Militaristic depictions soon give way to a surreal fantasy about the coupling of these opposing forces as a melding of female forms. The pencil textured surface of the stop-motion animation is transformed into a digitally rendered world where androgynous soldiers pass through headless tree-like bodies and eventually shed their uniforms and weapons to become a single entity, only to be consumed by the atmosphere as the triptych loops.

Lee crafts some of the female/tree hybrids depicted in the animation into evocative clay sculptures that are exhibited as discreet objects poised on pedestals. Entitled Trees in Paradise (2017) these sculpted forms give a physical presence to the images in the video. Lee's watercolors and charcoal sketches also relate to scenarios referenced in the animation.

In addition to her thoughtful and compelling work about the DMZ, Lee also includes an earlier tongue and cheek animation, Song From Sushi (2016). This critique in the format of a music video begins with female bodies dancing as items on a rotating sushi bar in sync with pop vocals. It eventually turns more sombre in tone and gives way to an undersea world. Here the narration equates these Asian women with exotic fish in the sea. It becomes clear that not only does Lee have a feminist agenda, but she is able to couple political history with personal explorations and parlays them into resonate artworks that are simultaneously informative, inventive and humorous.