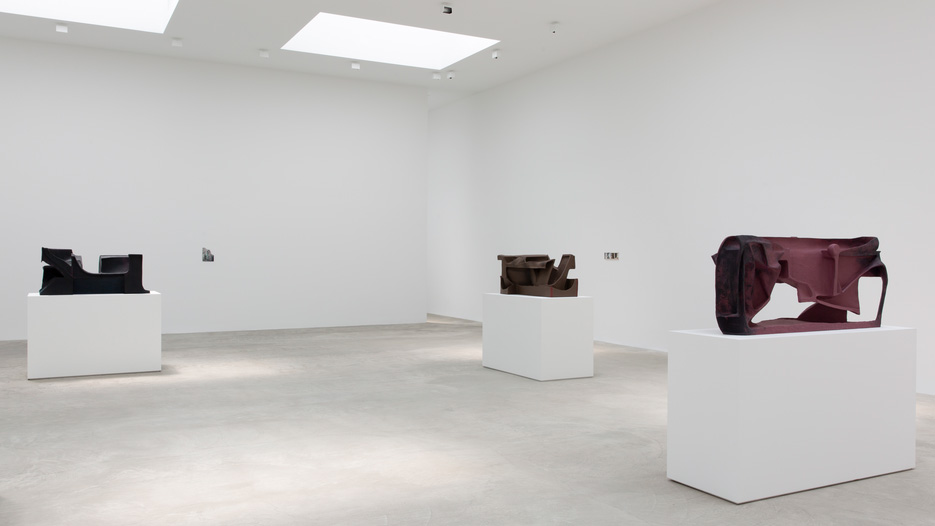 It is hard to know what to make of Vincent Fecteau's current exhibition at Matthew Marks Gallery. In the installation there are five papier-mâché sculptures that sit atop pedestals and five small collages that hang on the walls in a very large room. The sculptures and collages are in dialogue with each other but exactly what they are saying remains a mystery. Fecteau's sculptures feel to me like almost-recognizable objects, somewhat architectural in form, but more like models for fantasy buildings rather than actual ones. The shapes share a kinship with discarded foam packing materials whose irregular forms are a combination of holes and protrusions.

To fully experience each papier-mâché sculpture it is necessary to view it from all sides. Each contains a collection of creases and crevasses, presences and absences, curves and caves, as well as portals and frames assembled together in uncanny harmony and painted in modulated and muted tones. The untitled works (created between 2014 and 2016) while referential, are rooted in the language of abstraction. A 2016 MacArthur prize recipient, Fecteau is something of an anomaly. His artworks defy definition or category and are purposely obtuse. They are things meant to be looked at, considered and contemplated, but Fecteau offers little explanation, stating, "I long for the form that exists free of so called understanding and that operates in a purely abstract, maybe unconscious way."

Untitled (2016) is crafted from papier-mâché, acrylic paint and cardboard tubes. It is painted the color of cream infused coffee and augmented in sections with blue and black. The sculpture is more horizontal than vertical and to me, has the shape and aura of a fantastic parking structure from which there is no entry or exit. As the intricate shapes contained within the whole of the coffee colored form extend from left to right, they are framed and contained within a frame-like enclosure. One end is painted black and is abutted by a delicate calligraphic shape painted a deep gray blue. The almost body sized work is both flat and three dimensional simultaneously and is unique in its relation to the space it occupies. Fecteau instinctually combines the biomorphic and the architectural into complex forms that feel both constructed and organically developed.

To complement his sculptures, Fecteau also presents five much smaller collages. These are curious works that appear to ground the sculptures in some ways by offering possible reference points, as in Untitled (2014), a cracked marble wall draped with dilapidated striped fabric is juxtaposed with a snapshot containing a curvilinear architectural detail. Clearly, Fecteau delights in the relationship between decorative embellishments and functional support. In another untitled collage from 2014, he assembles snapshots of trapezoidal forms on gray carpet with a sideways photograph of an interior space (perhaps a hotel room) with lamp shade and pillow. A piece of white rope with frayed edges encases the top, bottom and one side of the collage, though it does not cover the entire assemblage. Rope, this time painted gray with a splattering of pink, also frames the edges of an untitled sculpture nearby from 2016.

It would be convenient to think there are specific and reciprocal relationships between the five collages and sculptures but Fecteau is not about the obvious. His installations are experiential: it requires moving around the gallery, taking in the sculptures from the front, back, and sides, wondering about architectural and domestic spaces, two and three dimensions, real and imagined forms and how they all relate to one another. Fecteau has remarked, "I've often fantasized about making a form that would be so incomprehensible that it couldn't be seen." While his works engage with that which is incomprehensible, it is fortunate for us that they still can be seen.