Stas Orlovski
The running man has nowhere to go 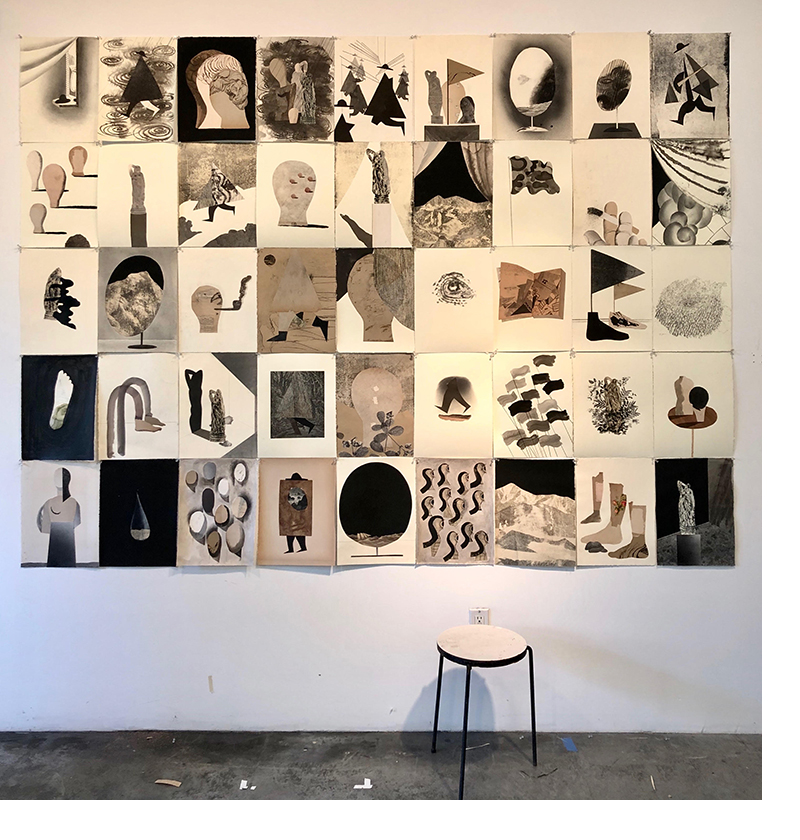 Creating during the Covid-19 pandemic has meant different things for different artists. For many, it is a time for reflection and experimentation as day to day life is far from normal. As art professors are struggling to teach online, presenting lessons via Zoom, the energy they have for studio work has shifted.

Stas Orlovski thought his quarantine time would be an opportunity to delve into making complex new projects that he had been visualizing in his mind's eye for some time, but had not yet been able to focus on. The reality of this situation — the lengthly unknown of the pandemic and quarantine — prompted him to shift gears and rather than embark on more involved long-term projects, he has been creating daily works on paper. The satisfaction of working more quickly and the feeling of accomplishment at the end of the day became a way of coping with the open-endedness of quarantine.

Though trained as a painter, Orlovski also works with time-based media making site-specific installations where still and moving images connect. These are complicated projects that involve image mapping and stop-motion animation. Recent installations such as "Running Man" at the Wende Museum (September 29, 2019 - April 5, 2020) and "Chimera" at the San Jose Institute of Contemporary Art (November 16, 2019 - March 22, 2020), used continuous loops projected onto walls to coincide with intricate xerox transfers and charcoal drawings. In both his animated and static works, Orlovski references Russian Suprematism, European Surrealism and Soviet experimental animation. These references are autobiographical: Orlovski was born in Moldova and as a child fled the Soviet Union to Tel Aviv, then Paris, eventually settling in Toronto.

Currently, in the center of his studio is a large table piled with books, fragments from abandoned sketches and left-over collage remnants. Each day, he spontaneously generates a collage drawn from these materials. While Orlovski often revisits recurring themes — heads, hands, statues, running figures, mirrors — he is doing so with a renewed vigor and intensity. The growing collection of works on paper (15 x 11 inches) combine childhood memories and dream imagery with fragments that reference current, as well as historical events in thought provoking and enigmatic ways. The new pieces purposely engage a limited palette: the tones of sepia, black, white and gray, as well as the colors of aged paper and book pages from different eras.

In numerous works Orlovlski creates a running figure. Often, silhouetted legs are connected to a triangular shaped body with no head, but sometimes a wide bowler hat. These figures are fleeing, but from what or who is never revealed. The running man drawings have a Constructivist sensibility built from an arrangement of fragmented geometric shapes. Heads are another recurrent theme. In Head with rocks, Head with pipe, Head with curtain and Head with plants, the central object is a featureless head, akin to a tailor's dummy into which or onto which Orlovski collages or transfers other items— be it small rocks, garden plants or the texture of a window curtain. These ambiguous heads somehow take on distinct personalities and emotions. Flags are another recurrent theme. Depicted as hard edged geometric triangles, as well as fluttering gestural brush-strokes, they appear alone, as well as in clusters. Flags are symbolic and can represent a range of causes— both celebratory and political.

Orlovski is indulging in the freedom to create in the studio without a tangible goal or a specific outcome. As he continues to work and re-work his pieces, he has given himself permission to play. That play is a treasured gift and a moment of respite in otherwise difficult and troubling times.