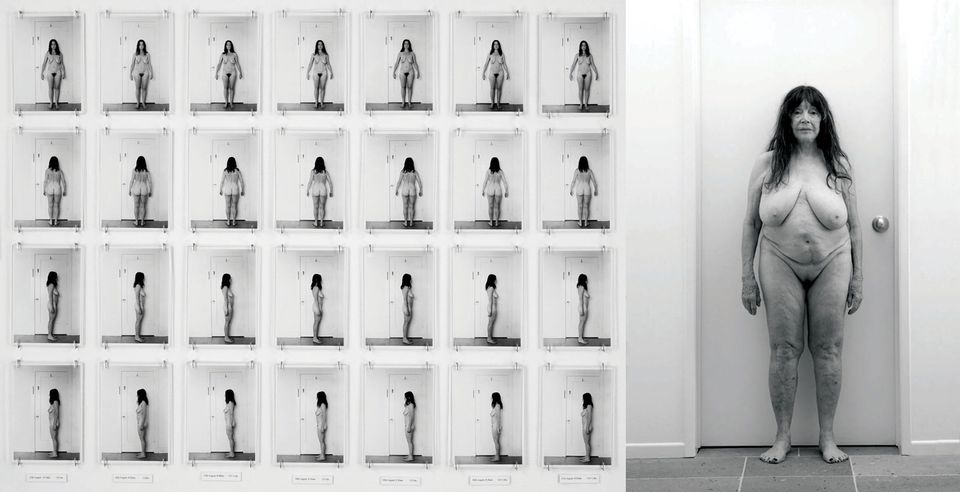 Within the intimate space, two grids of small black and white photographs face each other on long opposing walls. One grid is comprised of 148 prints hung in four rows and was created in 1972 as an exploration of the female body by physically 'sculpting' it through diet. The accompanying statement describes how the work was done in the traditional Greek mode: "The Greek sculptor worked at his block from all four sides and carved away one thin layer after another; and with every layer removed from the block, new forms appeared." This passage from Carl Bluemel's "Greek Sculptors at Work," 1969 goes on to say, "Thus the same figure which started as a block was worked over in its entirety by the sculptor at least a hundred times, beginning with only a few forms and becoming increasingly richer, more rounded and lifelike until it reached completion." What Antin and the Greek sculptors had in mind, was to reach an ideal image, yet they both had to work with the limitations of the material— be it marble or the living female body. Through this succession of photographs, Antin documented her body, posing nude from the front, back and sides against the same neutral background. Shot over 37 days, the work records the subtle changes in the artist's body as she lost 10 pounds.

45 years later and with a very different body, Antin restaged CARVING, making daily photographs of herself and recording the loss of 9 pounds. The wall text that accompanies the 2017 work is not rooted in art history, but written in a more personal and diaristic tone. Antin describes her need to reduce her weight from before beginning the project and that after loosing 11 pounds easily and finally being comfortable enough with her body to begin the photography, how hard it was to lose the 10 more pounds that coincided with the first iteration of the artwork. CARVING: 45 Years Later consists of 500 images as it took Antin 100 days before she accepted her body's refusal to reach the desired weight. While in 1972 she photographed herself in four poses, in the 2017 piece she includes a fifth image. "The only change would be a daily fifth photograph, in which I wore a bra, since my breasts had grown larger, preventing a clear view of my torso, especially from the front position."

Antin sees these works as sculptural and uses photography to document the changes in her body through diet. The earlier work was created at a time when artists were beginning to explore and expose their bodies in performance artworks. 45 years later, this methodology is less revolutionary. However, Antin's restaging of the project calls attention to her 82 years in this body and everything it (and she) has endured. As she states, the work is "even more political than the earlier one. … [it] depicts my belief that the older body is to be respected and admired. After all, it made it!" Does anyone really want to stare at Antin's aged figure? The photographs are raw and exposed and she is unabashed at presenting herself this way. While the impulse is to look away, there is something empowering about the presentation.

Perhaps that is why at the far end of the space, in a large color photograph, she depicts herself as a super-hero. Posing heroically in black underwear, her hands on her hips holding open a bright red cape, this self-portrait titled "!!!" (2017), is a celebration of the artist and her long career, as well as decades of influence. To many, Antin is beyond a super-hero.