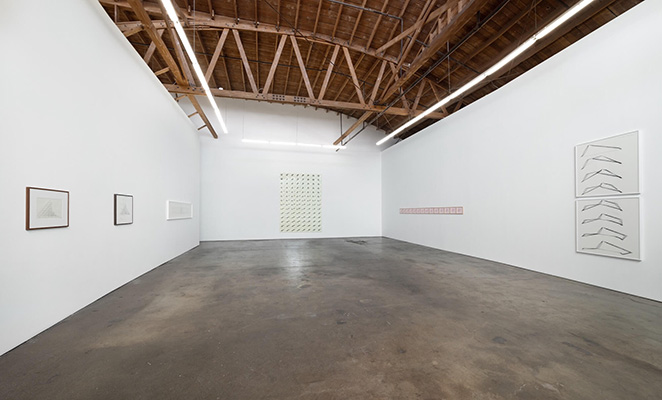 Why Channa Horwitz was not a name uttered in the same breath as Sol LeWitt, Carl Andre and other artists working within the framework of Minimalism in the 1960s and 1970s is a both a mystery and a question with a logical, albeit unsatisfactory answer. The answer could include that she was based in the Los Angeles suburbs, that she was a woman, a mother and not a cut throat careerist. It is tragic that she passed away before her long overdue recognition. In 2013, shortly before her death she was awarded a Guggenheim Fellowship. She was also included in the Venice Biennale in 2013 and the Whitney Biennial in 2014. Currently, her work is being shown in solo as well as thematic exhibitions world wide.

Why now is too easy a question. Why not before is harder to ascertain. So let's look at Structures.

Most of the twenty-five plus works on view were created between 1975 and 1985. According to the gallery press release, "Horwitz famously devised a drawing system in the late 1960s called Sonakinatography in which sound, motion, and space were tracked using beats of time graphed on eight-to-the-inch square grids. In each, the numbers one through eight were represented graphically by color or symbol and plotted according to an initiating set of rules." Horwitz's algorithms had her repeating a line or an arc over and over again filling a piece of graph paper with complex patterns. What at first seems like an obvious exercise in repetition surprisingly creates overlapping and undulating forms. Horwitz drew with both black ink and in color marker and while the works in color are more nuanced, the black ink on mylar pieces have an assured presence. In the eye catching Canon Diamond - Two Halves, 1982 it is an impossible task to trace the progression of black lines emanating from the corners and sides of the diamond shape. The eye gets lost along the way as the relationship between positive and negative space gets more complicated, eventually becoming a beautiful imbroglio.

One of the highlights of the exhibition is Variation and Inversion on a Rhythm IV, 1976, a work that contains 112 black ink on green graph paper pieces, each 8.5 x 10.75 inches, spanning over ten vertical feet. Within this amazing piece, Horwitz's lines dance across the paper due to subtle transformations and calculated displacements becoming and unbecoming specific formations.

Doubtless to say Horwitz was a focused artist whose geometrical abstractions were created with a mathematical rigor and a linear cadence. Each work is a variation on a theme, but that is exactly what artists involved with sequence and seriality were about. Horwitz followed a strict rule set of her own making and in doing so created works on graph paper that appear logical and complex simultaneously. Her intricate works required patience, a deft hand and precision of mind. Each work is a unique investigation into the endless possibilities of rules, sequence and structure confidently carried to precise conclusions. When nothing is left to chance, structure reigns.

As Horwiz once remarked: "I feel that through chance comes structure, or that if chance plays out long enough it will become structure. That if we cannot see the structure in chance we are too close to see it. The theory behind my work is that through structure comes an apparent chance. If structure plays out long enough it will appear to be chance... The cycle of life as I see it is circular. The beginning and ending are only one step away from each other." (Channa Horwitz, 2005,)