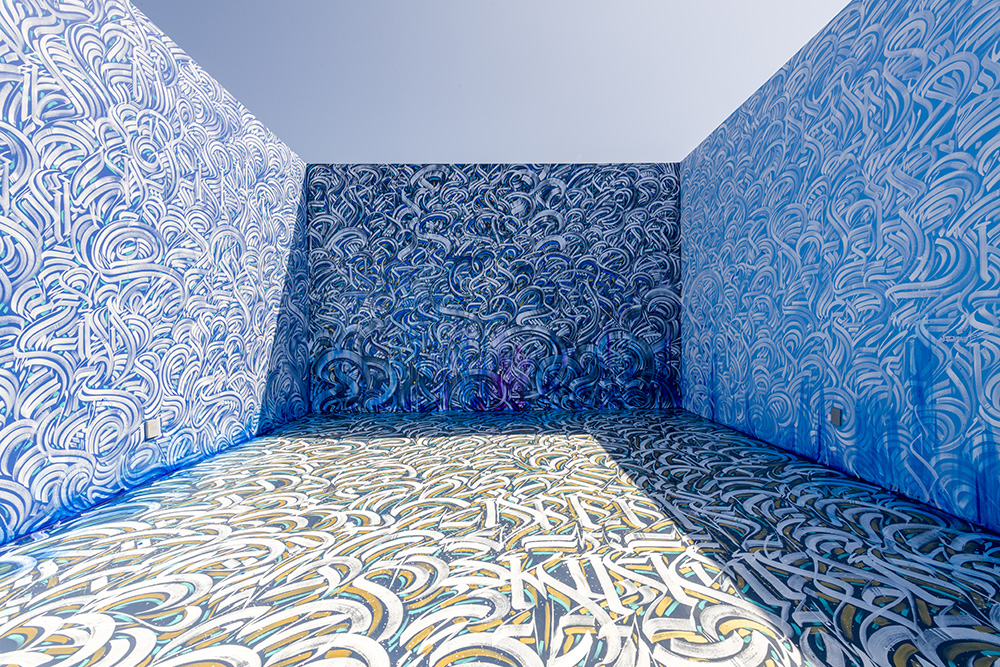 Alex "Defer" Kizu is a well known graffiti artist who has created "sanctioned" works for exterior facades as well as interior gallery walls. Defer has been a part of the the Los Angeles street art scene since the mid 1980s and is one of a handful of artists who has also embraced a gallery career. Defer moves easily between the worlds of street art and contemporary art, painting with a fluid style that juxtaposes colorful abstract gestures with his personal typography— visually akin to gangster Cholo writing. At L.A. Louver he brings the outside in, or perhaps it could be said, the inside out. His installation in L.A. Louver's Skyroom, “Immersive,” fills the walls and floor of the with an all over pattern in predominantly blue and white tones, augmented by bits or green and ochre.

I recommend visiting the work at different times of day with varying cloud cover in order to fully appreciate Defer's understanding and treatment of the space. In harsh light, the white brush strokes reflect the sun which cascades across half the floor. Along the edges where the wall meets the floor, there is a swash of darker blue that functions as an outline. In the center of the south wall pink paint enters into the composition, contrasting the cadence of the gyrating and undulating white and blue curves. The gallery website posts an enticing video of the artist at work; dipping his brush into white paint, methodically filling in the blue wall with assured gestural lines.

What is most striking about this installation is not only how it melds with the actual sky, which happened to be a cloudless blue when I visited, but how Defer painted the walls to capture the gradation of the space in both sun and shade. The Skyroom is a modest-sized enclosed balcony on the gallery's second floor with high walls that cast dramatic and ever changing shadows as the sun moves from east to west. Taking advantage of the shadows tonal variations, Defer created a complex work that balances the relationships between light and dark. It is remarkable that in just three days, he filled the space with undulating and intricate lines, creating a sensational work that, while rooted in abstraction, simultaneously alludes to language. While the criss-crossing curvilinear strokes suggest letter forms and words, there is no definitive message other than the power of art to evoke a wide range of emotions in both the creator and the viewer.